Introducing a new pet to the home, here’s how to introduce your dog or cat 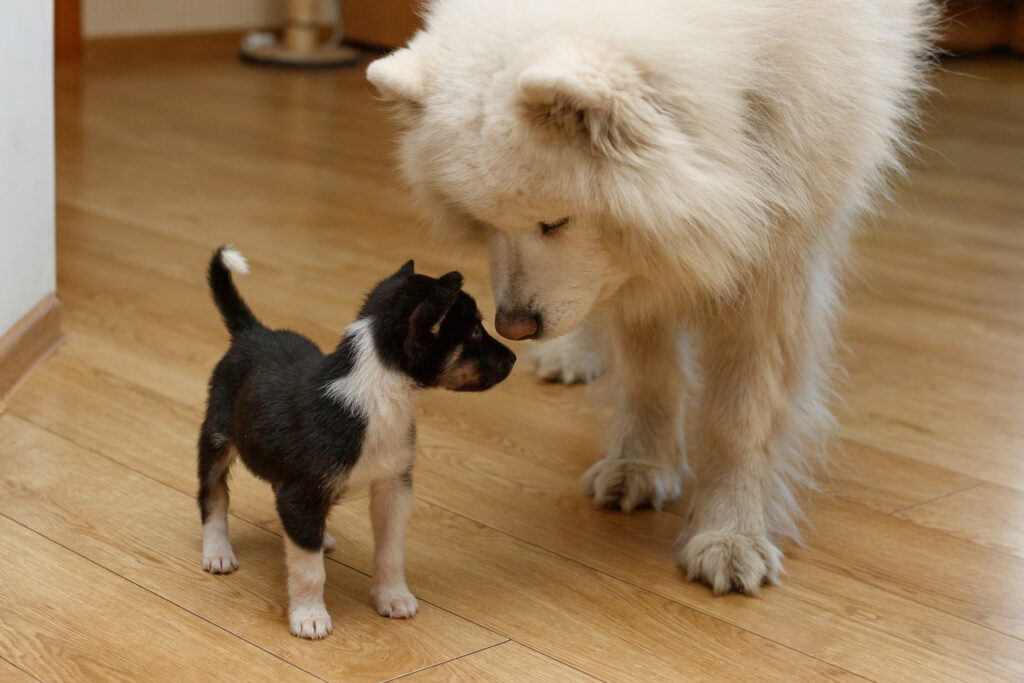 You want to welcome a new pet to the home, but how to go about it? Below are some tips to what to keep in mind when welcoming a dog or cat to a home with other pets or (small) children.

You decided to expand your family with a dog, how nice! But you already have a dog, or several of them, and want to know how to go about it. Dogs are used to living in a pack. If the dogs like each other, having a buddy around is a lot of fun. You are in charge of the pack which means you get to take the lead in the introduction. The first meeting is vital. Try to figure out if the dogs are a good match in advance:

• Character: pay attention to the character of both dogs as well as their energy level. Placing an easy-going dog with a high-energy companion may lead to frustration.

• Patience: be patient, both with the dog you already had and with the new dog. Give them time and space to get used to each other.

It is completely normal for some tensions to arise. The dogs have to get used to each other’s presence and personalities. If tensions fail to disappear after a couple of weeks, it is a good idea to consult a behavioural expert for advice.

Already have a cat and looking to add another to the family? There are certain things to keep in mind. Cats need a lot of time to get used to their new housemate. It is recommended to keep the new cat in a separate room at first. Give the new cat its own food, water and toys and make sure it feels at ease. The next step is to exchange cloths with the scent of both cats, so they can get used to each other’s scent. If both cats respond well, you can proceed to let the old cat into the new cat’s room for a bit while having the new cat explore the home. Separate the cats again after this step. Take it step by step and allow the cats to get used to each other gradually. Once again, it is important to make sure the cats are a good match in terms of energy levels and age.

Cats might need a lot of time to get used to each other, it can take anywhere between several weeks to months. Be attentive throughout the introduction process: keep an eye on the behaviour of both cats and don’t proceed to the next step as long as any tension or aggression remains.

Introducing a dog or cat to another animal

In the examples above, we talked about introducing dogs to dogs and cats to cats. But when introducing a dog to a cat (or the other way around), it is smart to keep the tips above in mind as well. Allow the animals to get acquainted gradually and carefully, study their behaviour and intervene if things get ugly.

What to keep in mind with (small) children

Perhaps you want to adopt a kitten or adopt a puppy and want to learn how to go about it with (small) children in the house. Once again, there are several things for you to keep in mind:

• Teach your child to treat the animal with respect and how to be careful during play.

• Do not allow your child to pick up the animal unsupervised.

• Teach your child to leave the animal alone when it’s sleeping and to avoid waking it up.

• Never leave your child alone with the animal, for the sake of both your child’s and the pet’s safety.

• Make sure your pet understands the boundaries as well.

• Teach your child not to feed the pet, it may be dangerous as well as stimulate undesirable behaviour such as begging.

Deworm your dog or cat on a regular basis: children can be sensitive to worm infection and the animal can transmit them to your child.

Plenty of pets are stuck in shelters, desperately waiting for their golden basket. Considering adopting a pet? Be very mindful about whether you and the animal are a good match and whether it would fit into your family situation. If the shelter indicates that the animal isn’t suitable to live with other animals or (small) children, accept this fact and be honest in this regard. Ending up with a bad match is the worst possible outcome! There are plenty of pets waiting for a comfy home and there is a good match for everyone. The staff at the animal shelter will be able to provide guidance and advice.