We donate 10% of our profits from the sales of these products to animal charities on a monthly basis to assist the ongoing welfare of animals.

Rockster Superfood is produced in Germany.

Rockster is the only bio-organic dog food in the world that is certified as a superfood in its own right, having transformed the lives of many dogs. 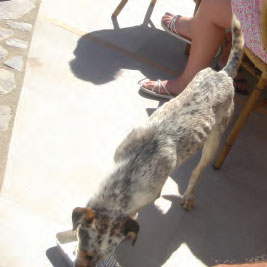 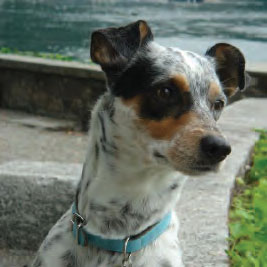 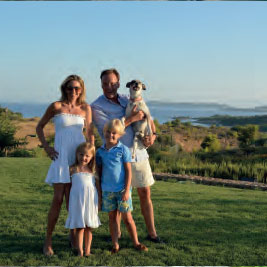 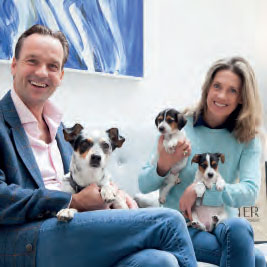 The Rockster – A True Story

The Rockster was a street dog from the back streets of Naples, found at death’s door aged at least 5 years old on the steps of La Conca del Sogno during Zoe and Sven’s honeymoon in 2004.

They cancelled their honeymoon to rescue him and embarked on married life together with their beloved mutt. He become their absolute rock in life, rescuing them right back in every way… They could never understand his refusal of commercial pet food until an expert explained that as a genuine street dog, he was genetically wired to avoid anything that could be harmful.

With life without Rockster inconceivable, they set about creating a food for him, that Zoe did not need to cook herself, with a team of experts using some of Zoe’s late Godfather’s theories on immunological responses to dysbiosis in the gut (Sir John Vane, Nobel Prize for Medicine 1982). A food that he would enjoy eating, nurture his gut microbiome and in the spirit of “let food be thy medicine, and medicine be thy food” might be able to extend his life.

The special food transformed The Rockster, who went on to become one of the oldest dogs alive in the world, dying at over 21 years old and at around 18 years old fathered a healthy litter of puppies, known as The Pupsters.

It has been extraordinary to see how many other dogs’ lives have been transformed by The Rockster‘s special food and how the Company that bears his name is now helping other street dogs like him.

The recipe names track his real life journey from Napoli to London and places they lived over the years in a magical story that started with a humble Italian street dog who captured two hearts on a honeymoon.

La Conca del Sogno literally translated means the “Home of Dreams” and only nearer the end of Rockster’s life did the family learn that “St Rock” is actually the Patron Saint of Dogs.

The story of Rockster’s Superfood

From the outset we could never understand why The Rockster never wanted to eat commercial pet foods, choosing to eat our leftovers and in hindsight most of his lone adventures resulted in us finding him in restaurants. It was not until 2013 when an expert explained that as a genuine street dog, he was genetically wired to avoid anything that could be harmful. ‘You’ll never see a genuine street dog eating chocolate’ he explained.

It was then that we learnt about what really happens in the pet food industry and what was in even the “natural” or “proper” foods we’d tried in vain to entice him with over the years. We felt deeply deceived and guilty that we had unwittingly tried to force him to go against his natural instincts of self-preservation. Life without The Rockster was inconceivable so we left no stone unturned to try and undo some of the damage we had unwittingly done over the years.

We set about creating a food for him with a team of expert nutritionists. Harnessing nutritional science and nature to create the world’s first superfood for our dog.

Our food is made in Bavaria, Germany in a Bio-certified and family owned private facility. Rockster is produced in batches and the whole production line is cleaned prior to any Rockster production. All our ingredients are sourced from sustainable farmers in Bavaria and Austria with the exception of Green-lipped mussel, which are sourced in New Zealand.

Rock your dog’s world and nurture them from the inside!

At Rockster we believe in the power of food to preserve and restore health and consider the gut a vital organ to be nurtured. We believe in superfoods, prebiotics and the absolute right to know EXACTLY what we put into our bodies. Dogs are no different! That’s why we’ve developed products for dogs that are life-enhancing in every way… Rockster canned food offers a viable and revolutionary option to those who would otherwise home cook or receive “fresh deliveries”, leaving dog parents time to spend with their dogs. Crucially unlike other pet foods, Rockster recipes are gently steamed, with the absence of oxygen and bacteria in a sealed BPA-free can.

Bio-Organic raw ingredients are more nutrient dense. These ingredients include animals fed bio-organic feed and grass, free from exposure to chemicals, antibiotics, steroids and growth hormones. Plant sources are free from exposure to chemicals and pesticides. Our carefully formulated combination of human-grade ingredients are scientifically driven based on each ingredient’s nutrient profile. The absorption of these nutrients is aided by our digestion enhancing, prebiotic ingredients, vital for gut microbiome health.

Rockster foods pack an antioxidant punch, with bio-organic ingredients such as quinoa, lingonberries, spinach, spirulina, blueberries and cranberries. Our recipes average at over 2000 units (raw ingredient ORAC value), with each can being the equivalent of a dog’s 5-a-day and significant higher than other pet foods (in some cases over 150 times higher). We are the first brand in the world to publicly quote our antioxidant levels.

Sous-vide is French for “under vacuum” and is used by Michelin chefs to maximise the taste of food as well as ensuring nutrients and fatty acids are not lost to cooking water or oxidised. The raw ingredients are cooked at minimum temperatures in air tight BPA-free cans. The first time these ingredients meet oxygen is when the can is opened, unlike most fresh or frozen foods which lose nutrients both in the cooking and storage process. Other canned pet foods have been cooked or heavily processed multiple times before being sterilised at high temperatures in the can.